Adventures of a Southerner in the Wild North – Ancestor’s Call. 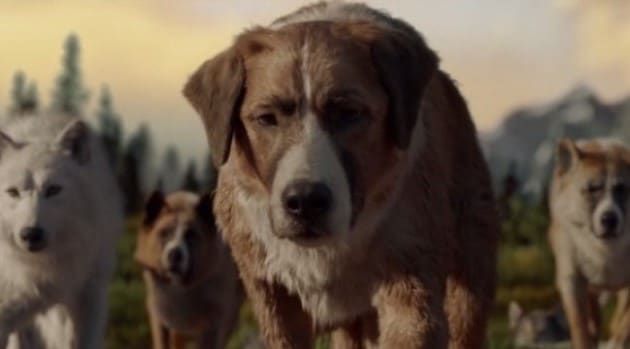 Adventures of a Southerner in the Wild North

American filmmakers offer us yet another special effects extravaganza – this time called it «The call of the ancestors» and is based on Jack London’s famous novel.

St. Bernard (with a touch of Scottish Shepherd) Buck is riddled with – lives on a big estate somewhere in the South of the USA, allows himself to ravage the owners’ holiday tables and smash up the kitchen. But he gets away with it?). But sooner or later his passion for delicious food leads to unfortunate consequences – he is kidnapped and sent north to the Yukon, where the gold rush was raging at the time. Here Buck falls into the hands of yet another well-wisher – Perrault the letter carrier (the famous Frenchman Omar Sy), who, despite the complexity and importance of his task (delivering mail by dog sled for 800 kilometers one way), shows great patience, until Buck settles into his new role and stops acting on the principle of «Into the woods, out into the woods..». Buck is gradually mastering the role of a sled dog and even, if I may say so, seizes power in the pack by force. But this idyll does not last long – the decision is taken to abolish the mail delivery by sledges in view of the introduction of the telegraph (there are quite a few similar absurdities in the film). So Buck and his crew find themselves out of business and fall into the hands of a whipped villain (no one has any doubts about the level of villainy of this character and such excessive sketchiness – one of the film’s weakest points). ♪ But a black streak is followed by a white one ♪ – Buck gets a new master named John Thornton (Harrison Ford), with whom he will have to follow his ancestors to the end.

Perhaps the strongest point of the current film adaptation of Jack London’s famous tale – the incredible level of special effects with which Buck’s character is created (he is, of course, inferior to the level of «The Lion King» Jon Favreau, but still impressive). This is also where the weakest point lies – the level of interaction between the dog and humans is off the charts at times: Buck acts as if he understands the man verbatim in the frame and so it remains a mystery why the producers didn’t throw in the towel and finally let Buck talk. Apart from laughter, this behavior of the dog as interpreted by screenwriter Michael Green and director Chris Sanders can cause nothing, but the realism of the computer dog is capable of scaring the youngest viewers.