Where are your wings, which I liked so much a review of the movie Diary of a B Girl. 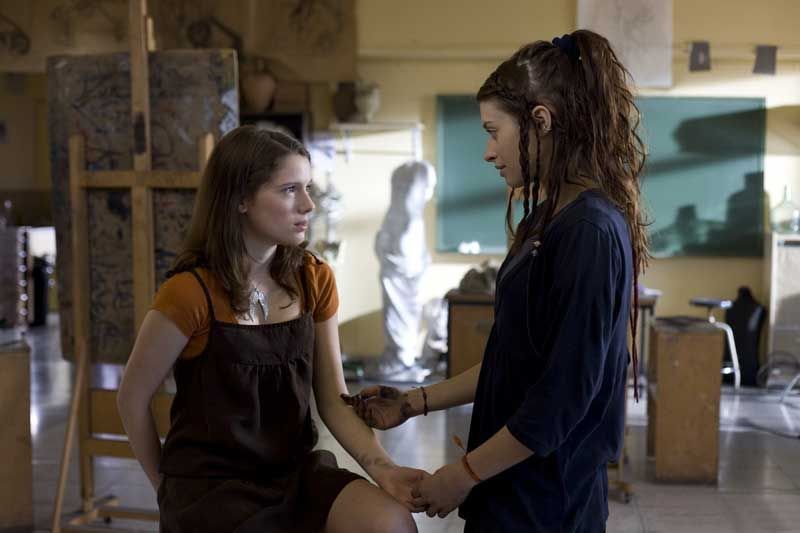 Where are your wings that I loved so much?

«Diary of a B-girl» (in the original – “Eloise”, after the name of one of the main characters) is perceived in the stream of tapes «Melissa: An Intimate Diary» (“Melissa P.”) и «Diary of a Nymphomaniac» (“Diario de una ninfomana”) – of a few years earlier, films, also Spanish, on the thorny question of the development of female sensuality. Hence the introductory note: if you – proud owner of… the Freudian object of female envy – refrain from making loud critical comments. Some boundaries between male and female sexual psychophysiology are difficult to cross.

The uncomplicated story of the young heroine’s tossing and turning between her shirt-boyfriend and the girl-closer-to-body is described poetically and lucidly. The saturation of the characters gives the film a parable-like undertone. Among the most easily readable is the pendant in the form of wings worn around the neck of the protagonist. The angelically innocent girl (note also the picture in the album), forced by the «land», tragically dies – That is «goes to heaven» Following his beloved father, the memory of whom he wears the pendant. It brings to mind the beautiful anime series «Union of the Grey Wings» – both by the gentle sweetness of the audio-visual series, and by the similarity of the subject matter, – Life and death, love and friendship, sin and purity, – and the central image of the sisterhood of winged maiden souls.

Other symbols develop this motif, emphasizing various aspects of it. Hiccup at a traffic light between green and red as an inability to choose – and death as a rejection of the world, where conventional notions of right and wrong replace the natural sense of right and wrong. The death of the heroine is implied, but not shown in naturalistic detail: the aftertaste of the film is defined by the road dissolving into the sunset – a direct allusion to the land of the blessed (in most of the world’s mythologies, the netherworld is in the west).

The scene of the girls’ bathing, repeated several times in the flashbacks, is also important. Water – a symbol of the sensual element, the subconscious. Relaxed naked bodies in the pool are also associated with fetuses floating in amniotic waters – Their infantile innocence and complete, unreproducible oneness with the mother’s body. The mother-daughter relationship is the central plot of the film – as in «Melissa », where it is resolved in a more optimistic way.

According to a bold statement by Vadim Schlachter, «98% of all women are bisexual, and only 2% lack this component […]. But only 30% are aware of their bisexuality, and 68% go through life without realizing it». It is hardly correct to generalize – Whether bisexuals experience the same attraction to men and women, making it difficult to distinguish between the sexes, or whether these feelings are qualitatively different, corresponding to the attraction of opposites and the unity of similarities; but the relationships of the film’s characters fit neither of these schemes. Eloise is androgynous: on the one hand, her feminine, sophisticated sensuality is irresistibly attractive against the straightforward pragmatism of her male counterparts (the anecdote about the pamphlet comes to mind) «Male Psychology from A to Z» And in a thick volume «Introduction to female psychology. Volume One»). In doing so, Eloise takes an active, leading – traditionally male – role in the relationship with Asia, takes her under her tutelage, becomes a mentor. Add to this the seductiveness of forbidden fruit – and we get the unbearably charming same-sex Romeo and Juliet of our day.